In 1849, two competing performances of Shakespeare’s Macbeth sparked a deadly riot in New York City. What began as a rivalry between two actorsan American star with a working-class fan base and a British tragedian with an aristocratic followingbecame a conflict over class divisions, British cultural influence, and permitted conduct in the theater. Previous scholarship tends to focus on the two actors, at the expense of understanding what led audiences at the time to invest so heavily in performances of Shakespeare. Using a mix of archival documents and secondary sources, my goal is to place the audience at the center of this real-life drama. What was the social function of attending performances of Shakespeare for antebellum American audiences, and how did audience experiences and expectations lead to the Astor Place Riot?

SURF gives me the time and backing necessary to delve into this fascinating piece of history. Thanks to this fellowship, Im able explore archival collections housed in London, New York, Washington DC and Berkeley, where I can find rare documents like playbills, newspaper reviews and first-person accounts. This project unites my two majors in American Studies and Theater & Performance Studies, and I am very grateful to have support for doing interdisciplinary work. I believe the Astor Place Riot has something to teach us about the power of theater today. 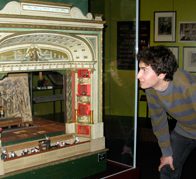