KCNK18 is a two-pore potassium channel that is hypothesized to play a key role in pain and touch. Mutations in the KCNK18 gene have been found in people suffering from familiar migraine. Furthermore, this channel is targeted by a variety of anesthetics as well as hydroxy–sanshool, the active ingredient in Szechuan peppercorn responsible for its tingling and numbing analgesic properties. Since the parts of the protein responsible for function and modulation of the channel have not been identified, the specific goal of my project is to create and screen a KCNK18 mutant library to investigate which parts of this protein are required for normal channel activity. I am specifically interested in identifying the parts of the protein that are responsible for its sensitivity to sanshool. In order to do this, I first introduce random single-point mutations into the KCNK18 gene, which goes through a series of molecular cloning techniques and is eventually used to transfect Chinese hamster ovarian (CHO) cells. Once CHO cells express the mutated channel, they are exposed to buffers with and without sanshool and their channel activity is analyzed using a fluorescence-based high-throughput assay.

The opportunity to conduct independent yet guided research has allowed me to further appreciate the wonders of science. There are so many things that can go wrong in an experiment that I have become a more perseverant and patient researcher and individual. Through this research experience, I have been able to interact with postdoctorates and graduate students, which has allowed me to learn more about a successful career in the sciences. Furthermore, I have been able to make connections between the research conducted in the lab and its implications for medicine. I want to thank SURF for allowing me to spend the summer doing concentrated research and my mentors, Diana Bautista and Prafulla Aryal, for their invaluable guidance and support. 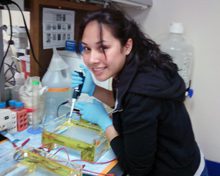