Ancient Cyprus has generally been shadowed by its neighbors Egypt, Greece, and Mesopotamia, yet the small island, is an ideal entrpot. In the Late Bronze Age (1550-1050 BCE), the influence of internationalism can be seen in the appearance of cylinder seals on Cyprus. This summer I am researching the interesting mix of locally and internationally produced cylinder seals and what they can tell scholars about Cypriot society. This study investigates the seals’ use on Cyprus, like what new roles they played and which Cypriot needs they fulfilled. I will study the seals, which are varied in iconography and style, in person at the British Museum in London, looking at how international motifs are reconstituted on a local scale. Studying small artifacts on a small island gives both a local and international picture of the Late Bronze Age and highlights an area and object that are often ignored.

I am greatly honored to be a SURF fellow this summer, and this opportunity means so much to me. Without SURF, I would not be able to physically work with the cylinder seals, which is necessary as the majority is unpublished. Also, with my going to the British Museum, many more doors have opened up, and my circle of Cypriot academic contacts has increased. My research this summer will not only result in a senior honors thesis for Near Eastern Studies, but will also be the stepping stone for even more research within the field of Cypriot archaeology. 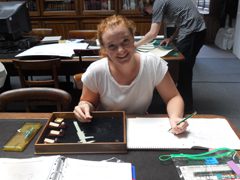