Under the Biological Species Concept, species are defined by the presence of interspecific reproductive isolation, and under this model, both pre-zygotic and post-zygotic reproductive barriers are important in preventing gene flow between populations to drive speciation. My project focuses on pre-zygotic reproductive isolation in the form of courtship songs. In Drosophila athabasca, females from one population are less receptive to the courtship song of males from other populations. I plan to hybridize recently diverged, behaviorally isolated populations of D. athabasca, and use next-generation sequencing techniques to map regions in the genome that are important to courtship song and ultimately speciation.

I am honored to be chosen as a SURF/Rose Hills research fellow. It gives me the opportunity to conduct original research with biologists at UC Berkeley, who are at the forefront of their fields, and allows me to delve into questions about genetics and evolution that I have not had the time to address with a full course-load during the school year. Most importantly, I appreciate the chance to begin my senior thesis in the summer and build my research career. 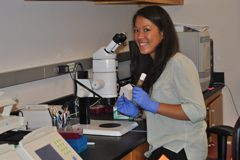