Genome sizes vary greatly across many species and within species, though their biological significance is still poorly understood. Large amounts of eukaryotic genomes are composed of repetitive DNA, whose functions also remain ambiguous, and are often called junk DNA. These repeats usually exist in the form of heterochromatin, DNA that is tightly packed as a possible mechanism to silence or repress the expression of these sequences. A group of repetitive elements include transposons, or transposable elements, which can jump around to different locations in the genome, interrupting other genes and creating mutations. Drosophila melanogaster fruit flies serve as useful models to study these genetic features, because their genome sizes among different strains can differ dramatically. It is likely that flies with larger genomes have more repetitive DNA, and therefore causes heterochromatin to be less tightly formed. This dilution of heterochromatin may allow the upregulation and movement of transposable elements, which may play a role in senescence (aging).
To address this question, I am utilizing a combination of old and new technologies. In order to estimate genome size, I will use flow cytometry by staining nuclei and measuring relative fluorescence to reflect size. To determine if transposable elements are de-repressed, I will use RNA sequencing on lines with varying lifespans. Previous studies have demonstrated that variation in heterochromatin contributes to differences in longevity. Using lines with varying lifespans, I will test if long-lived lines have lower expression of transposable elements. Identifying a link between transposable elements and aging may elucidate a new role for junk DNA.

I am grateful to the Rose Hills Foundation and the SURF program for giving me the opportunity to immerse myself in a biological research project that I am passionate about. It is inspiring to work alongside leading researchers in the field and has cultivated an interest in genetics beyond the classroom. As a student looking to narrow the vast field of biology to specific areas of interest, this experience is extremely valuable. I would like to thank my mentor and principle investigator Prof. Bachtrog as well as my mentors Alison Nguyen and Carolus Chan for their support and guidance throughout this research project. 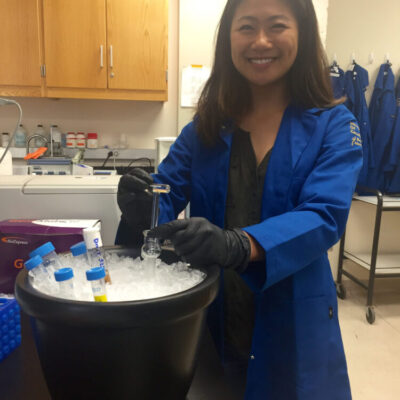