Pragmatic Idealism? Assessing the Promise and Perils of the Decentralized NGO: A Case Study of a Social Enterprise for Textile Production in India

Jhoole, a textile production NGO based in Madhya Pradesh, India, formed in 2008 through a dialogical need from sari weavers that were working under indentured conditions. Since its formation in 2008, Jhoole has provided collective ownership, secured creative freedom over design/production, implemented sustainable agricultural practices, and supplied living wages to these female artisans. However, in March 2012 after reading Marx, Hannah Warren, the founder and Executive Director of Jhoole, un-incorporated Jhoole in an effort to dismantle institutional hierarchies that limited the extent to which local stakeholders were able to direct the activities and assets of the organization. My research involves both a case study analysis of the effects of Jhoole un-incorporating and a larger deconstruction of the term economics of well-being in its relation to the proto-Indian social enterprise/NGOs efforts at effectively (or ineffectively) promoting such an economics of well-being in India.

I am honored to receive the SURF fellowship. The research I am conducting through SURF will materialize into my senior thesis. This will be my third trip to India, a country that I will continually visit/live in throughout my life as I plan on studying Eastern Philosophy, Religion, and Literature in graduate school. 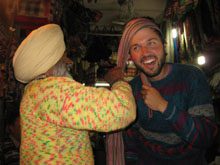