Common Ground: Co-habitation of Humans and Carnivorans in the Berkeley Hills

The area in and around Tilden Regional Park in North Berkeley is home to both a growing human population and a number of species of wild carnivorans. Little is known about the population densities and distributions of the latter and their interaction with human populations in this area. In this study, I will use camera traps to determine baseline densities of ubiquitous species, such as the coyote (Canis latrans) and the bobcat (Lynx rufus). Camera traps with scent lures will be used to establish the presence of the more elusive puma (Puma concolor). From this project I hope to gain a better understanding of the ecology of the unique interface between human-dominated landscapes and the preserved wilderness that characterize the North Berkeley Hills.

There is an erroneous perception that research is done alone -- that ideas, experiments, and papers stem from one individual, while input comes only later during the peer review process. My experience preparing for this project has proved otherwise, as I have already met a number of people who have influenced and broadened my initial ideas. In the implementation of this study, I look forward to working closely with my advisor and being a part of a group of student scholars. Through these interactions I hope to continue to expand my academic research skills and increase my understanding of the natural world. 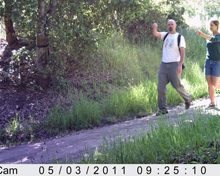