Because any given cell carries an overwhelming excess of genetic information, they need a way to selectively pinpoint what they need, when they need it. Silencing entire regions of the genome via chromatin modifications is one method that eukaryotes have developed to great effect. The four SIR (Silent Information Regulator) genes are absolutely critical to silencing in yeast. Wild-type Sir3 typically requires Sir2s deacetylation activity, and not just the deacetylation itself, in a mechanism that is still unclear. I will use sequencing and protein structural analysis to study PCR generated point mutations in the SIR3 gene that recover silencing in order to help me identify key functional regions in the Sir3 protein.

To my mind for the last 16 years, the scientific method has been an almost mythical standard-bearer of progress. In classes, I learned about countless experiments and the brilliant minds behind them in an impressive parade of historical giants in the scientific community. And now, finally, I have the means to be a part of that in my own small way. Though I am often intimidated and sometimes overwhelmed by the breadth of knowledge that already exists in my field, I feel incredibly grateful that someone thought my research was worth supporting, and am honored to be a part of such a wonderful program. 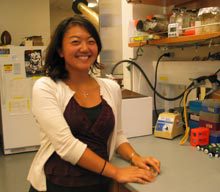 Major: Molecular and Cell Biology
Mentor: Jasper Rine, QB3
Back to Listings
Back to Donor Reports