Designing Spatial Interactions for the Internet of Things

The Internet of Things (IoT) refers to the emerging network capability between ordinary objects and promises novel interactions between devices and between people in everyday scenarios. For example, in an IoT-networked smart-house, temperature sensors embedded throughout the building sense changing environmental conditions and strategically close windows to conserve energy. Traditional user interfaces for programming interactive devices focus on single-device programming, but a programming interface for IoT networks must account for coordinating large amounts of devices as well as the autonomous nature of the devices themselves. My research focuses on building a user interface to allow anyone to create complex IoT networks quickly. I will extend the flow-based programming paradigm (FBP), a drag-and-drop user interface technique popular in content-creation software tools, to allow users to coordinate many components at a time in variable environments. I will then test the interface against control interfaces in a user study where participants prototype networks to accomplish tasks using several devices at once in an IoT network. By providing a sample of programmers with design tasks and evaluating the results with metrics derived from human-computer interaction research, we will better understand how to build programming interfaces for IoT-supported interactions in everyday settings.

I am extraordinarily grateful for the opportunity to investigate new interfaces for Internet of Things networks. It is wonderful to be able to conduct research in a field that could improve how people use technology in everyday settings, and I am thankful to be able to spend an entire summer dedicated to finding answers. I would like to thank the SURF program and the JSB Fund donors for granting me the opportunity to do so. I sincerely appreciate your support in granting me this incredible opportunity. 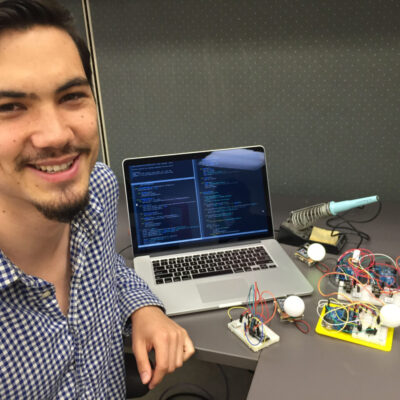