With the amazing economic transformations China has shown the world in the past several decades comes an expectation for the country to show signs of also transforming politically. What is the ideological glue that holds the country together after the obsolescence of Marxist-Leninism and Maoist thought? Nationalism seems to be the new official religion of China. Through participant observation in a few Shenzhen high schools, I want to see how nationalism is conceptualized and combined with morality specifically within the Chinese education system. I hope to observe the effect that moral education or deyu has on the students’ views on morality and nationalism via interviewing students and teachers from normal and vocational schools.

I have always wanted to do sociological research in China, and I'm incredibly excited that SURF gave me this opportunity. Growing up in the West but coming from a very Chinese cultural heritage, I've lived on the borderline of both cultures. Consequently, I've had to question many of my values, including Chinese nationalism. So this project is important in a quite personal way, but also in terms of hopefully allowing the West to gain a more mature understanding of modern day China. For many of my interview subjects, I will be asking them about some very emotional issues, so I'm most concerned about how to shape my own attitude as to be scholarly and not presumptuous. 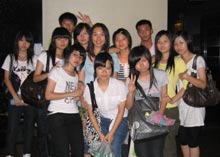