The Effect of Microgravity on Murine Disc Mechanics

Living on Earth, gravity constantly exerts a mechanical load on the spine, which puts pressure on the discs and causes them to gradually lose height throughout the day. However, this constant mechanical load is greatly reduced while in environments with microgravity such as on the international space station. Due to long-term mechanical unloading in the presence of microgravity, astronauts have an incidence of disc herniation 4.3 times that of the general population. Being able to better describe the physiological changes to the IVD caused by prolonged time spent in microgravity would help the medical community understand the sensitivity of disc homeostasis to mechanical loading and therefore more fully know the role of mechanical loading in disc herniations. Given that 2 percent of the worlds population has herniated discs at any given time, having a better understanding of this affliction could be used to try and create preventative care in order to help decrease the prevalence of herniation. This project focuses on the effect of long duration space flight on the mechanical properties of the intervertebral disc (IVD). Specifically, mechanical changes induced by microgravity will be investigated by studying the discs of mice that were flown on the international space station for 30 days.

Thank you so much for helping students like me take meaningful steps into the world of research. Having the chance to pursue independent research while still an undergraduate is such an incredible opportunity not only to learn more about our chosen subjects, but also to learn more about the process of research in general. I am really looking forward getting to study both the biomechanics of the spine and how to conduct research in general. 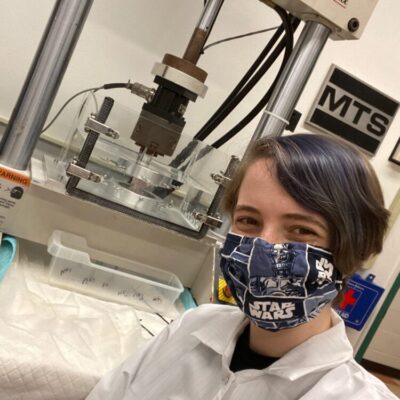