This summer I will be working in Ken Goldberg’s Automation Lab on a project in surgical robotics. Currently most surgical robotics systems are not “true robots”; rather, the actuator components of the systems mirror the motions of a human surgeon operator. I will be conducting research into the possibility of increasing the autonomy of such surgical robotic systems. I will be working on the Raven surgical robot system to integrate a vision component to the overall system. After this first step I will then be conducting research into what is known as apprenticeship learning. Apprenticeship learning is a system under which a robotic system observes a human performing a simple task like tying a suture, and then replicates the same motions as demonstrated by the human. In effect, we want to train the robot through having it observe the actions of a human and then repeating those actions.

I am honored and delighted to be given the opportunity of working on this project. As an engineer that is also interested in the medical field, I see surgical robotics as an incredible step forward in using engineering to revolutionize health. I am excited to be able to work full-time on this research, and hope to make significant progress in this research. I am indebted to the SURF/Rose Hills program and the Goldberg group for their support. 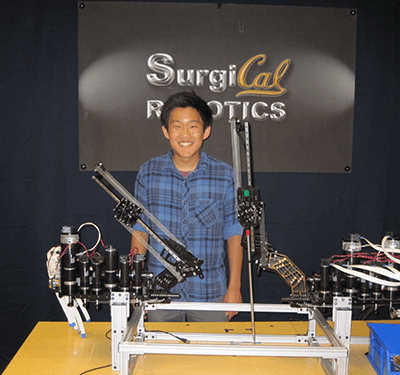