The purpose of my research is to investigate the neurobiological basis of sleep disturbances in humans using neurodegenerative conditions associated with signature patterns of sleep changes as a model. Alzheimers Disease (AD), Corticobasal Degeneration (CBD) and Progressive Supranuclear Palsy (PSP) are the most frequent tauopathies, neurodegenerative conditions associated with accumulation of misfolded tau protein in selective brain areas. Despite coursing with neuronal loss and accumulation of misfolded tau inclusions, these conditions involve different brain areas and cause distinctive clinicopathological features. In all these diseases, patient experience disturbances in sleep/wake pattern from the early stages of the disease progression. My goal is to investigate the human Locus Coeruleus (LC), a pontine nucleus implicated in several steps of the sleep/awake regulation cycle. I will use quantitative methods to estimate the burden of tau inclusions and what kind of neurons are involved in AD, PSP and CB, and eventually attempt to correlate these data with clinical objective sleep measures of the same patients. I will be examining a unique collection of 15 post-mortem human brains (5 PSP, 5 CBD, 5 AD) processed using a method to enable network-based analysis. All the tissues were provided by Memory and Aging Center/UCSF Neurodegenerative Disease Brain Bank (NDBB). By using optimized immunohistochemical free-floating techniques, the LC region will be double stained against tyrosine hydroxylase, the rate-limiting enzyme in the synthesis of norepinephrine, and against p-tau to tag p-tau-positive inclusions. By using stereology, a method that utilizes random, systemic sampling to provide unbiased and quantitative data, I will examine the total number of neurons with p-tau inclusions and which percentage of these inclusions are in neurons expressing the primary neurotransmitter produced by LC. The results will be compared among the groups.

I would like to thank the SURF Program and the Thye Foundation for providing me with an amazing opportunity to learn more about neuropathology. This research will allow me to develop problem-solving and critical thinking skills. My sincere gratitude also goes to my mentor Professor Grinberg and my co-worker Rana Eser for their continuous support. 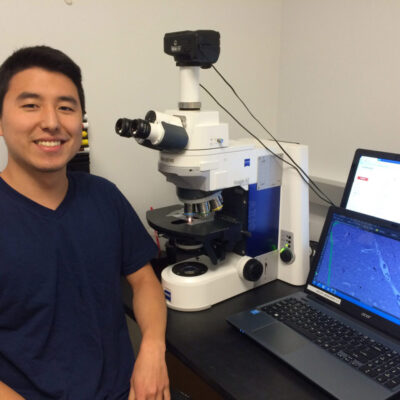