Well-Intentioned in the Worst Way: Retracing the Life of James Plemon Coleman

James Plemon Coleman was the Mississippi Governor who, in 1957, assured his fellow citizens that a baby born in Mississippi today will never live long enough to see an integrated school. He vowed to resist the federal mandate handed down by Brown in 1954, and became the first head of the controversial State Sovereignty Commission. But due to his later ties with the Kennedy-Johnson Administration and an eventual reputation of being a racial moderate, many think segregationist is a title he did not earn. In order to better understand the development of Colemans political identity, the development of his racial identity, and where the two might intersect, I will travel to Mississippi and spend two weeks in the State Archives researching his life. I hope to emerge with a more comprehensive picture of who he was as a person, and the ways in which his personal views on the race problem informed his somewhat ambiguous political record.

Im excited about this project for two reasons: Ive never done archival research, and Ive never been to the South. Both are scary in their own ways, yet both will allow me to grow. Being afforded 8 weeks as an undergraduate to pursue a single intellectual threadto watch it twist, turn, perhaps unravelis a blessing that I am exceptionally grateful for. As I get closer to the end of my undergraduate career, I realize more and more that Im not done being a student yet. In addition to providing the foundation for my Senior Thesis in the fall, this will hopefully give me a taste of what a graduate program in History might be like. 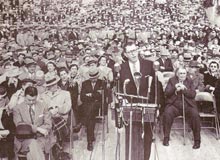