Imagine a person plays two games, Game A and Game B, each with a higher probability of losing than winning, in some sequence. A possible sequence might be Game A, followed by Game B, followed by Game A, etc. Surely, playing any sequence of these two games will result in an overall loss. Against intuition, this turns out not to be the case. In fact, by playing these games in certain sequences, over time a player will experience an overall increase in capital. This phenomenon is called Parrondos Paradox, a mathematical concept that is proving to have applications in numerous different fields including game theory, financial risk, genetics, and physics. The goal of my research would be to investigate this paradox. New findings could lead to computer application tools that would be implemented into computer programs used to minimize risk in financial transactions, medical decisions, and other sciences.

The Anslem M&PS Fund gave me one of the most fulfilling summer experiences of my entire life. The opportunity to do my own research project was more than I could have ever dreamed of as an undergraduate. By completing my project, I learned what research was about, but I also grew more confident in my own abilities and skills. As I progressed in my project, I learned to fear problems much less, and how to seek help when I needed it. I learned that there is always a way to go about solving a problem, and how to use creativity to develop possible paths to a solution. I enjoyed interacting with faculty who I have great awe for, and really enjoyed discussing my project with people in the mathematics field. After completing this project, I have faith in myself that I can pursue what interests and excites me, both in mathematics and in all other areas of my life. I no longer feel restricted by fear. Thank you! 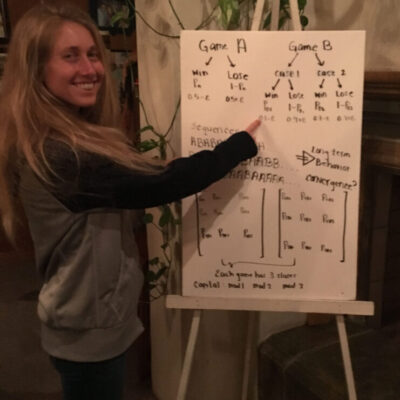