Beyond the Binary: New roles and implications of NGOs in Haiti

There are over 18,000 NGOs operating in Haiti, many of which provide overlapping services in the same regions without collaboration. Recent academic debates have pitted NGOs against the Haitian state, claiming that the multiplicity and fragmentation of NGOs prevents any sort of uniform policy from being implemented and thus further undercuts the legitimacy and accountability of the Haitian state (Etienne 1997). My research project will attempt to challenge this dualistic framework by conducting participant observation with the Cap-Haitien Health Network, an organization that coordinates the operations of over seventy health NGOs working in the region of Cap-Haitien, Haiti, and thus specifically addresses the critique of NGO fragmentation. My research addresses three points: How do the Health Networks practices improve the functioning and accessibility of health NGOs in Cap-Haitien? How, in practice, does the Health Network cooperate with the Haitian government in its attempts to coordinate NGO policy, accountability and efficiency? How have the Health Networks operations contributed (or not) to the recent rise of an NGO class in Haiti?

The SURF fellowship has enabled me to travel to Haiti so that I can witness and experience first-hand how health NGOs in the region of Cap-Haitien are affecting the people living in this northern region. Without the SURF award, I would not be able to provide as in-depth of an analysis as I am confident I will be able to do this summer. Additionally, as both a citizen of France and the U.S., Haiti has a particular draw for me. The SURF award is enabling me to really bring together an academic questioning of world systems as they are manifested in international development as well as a personal questioning of where my own identity fits in the context of a beautifully complex country such as Haiti. Thank you! 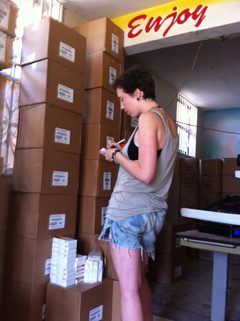