The Effect of Viewing Sexual Films on Memory

This is a very exciting time for me. I have been assisting with research in the Shimamura Lab. I would have never thought I would have the chance to conduct my own project. I will definitely take advantage of this opportunity and make the best of it. I am a little afraid of offending conservative participants, as sex is a taboo subject across many cultures. Therefore, I would have to been careful in my recruitment. But, because sex is a taboo subject and not many people would be willing to experiment on it, this motivates me to work even harder on it. 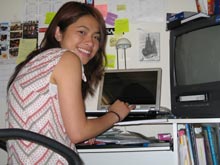