Teuf Love: Verlan in French Rap and Beyond

In the banlieues or suburbs of major French cities, unemployment, crime and societal exclusion are daily realities for the largely immigrant communities. In the 1980’s, these conditions spurred an explosion in vocabulary and popularity in the syllable-switching slang practice verlan, alongside the nascent French rap scene. My research project and French Honors thesis will explore the poetic and social functions of verlan in rap and pop culture amid France’s conservative language policies. I will trace the genealogy and ethos of verlan in the French rap movement, identify how this ethos has evolved and spread to mainstream youth culture, and chart the conscious and unconscious presence of verlan and the tensions it creates between high and low culture. Through interviews, concerts, and participant observation in Paris and Marseille, I hope to shed light on verlan as both subversive social and poetic tool and defining element of modern French language use.

Being chosen as a SURF scholar is without a doubt the best way I could imagine finishing my Berkeley experience. I am thrilled to be able to study the French language as a living, evolving thing outside of textbooks and novels, and interact with its speakers and effects directly. To be given this independence as an undergraduate is humbling, and I am committed to contributing new perspectives to the discourse surrounding verlan. I will grow as a scholar and a human being, and I am so grateful. 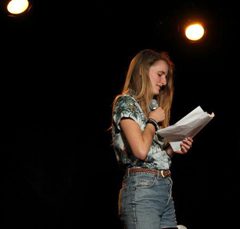