The American Vernacular in Twain and Hemingway

My research deals with a trend in American prose that, starting around the nineteenth century, led to an increasingly speech-based way of writing, called plain speech, characterized by simplicity in language, conciseness, and straightforwardness. Starting with Mark Twains Adventure of Huckleberry Finn, which was the first time that a serious work of literature maintained the use of a dialectical speaker throughout itself for a purpose other than humor, American literature entrenched itself in the vernacular, breaking with the verbosity and erudition of Anglo writers. I am tracing how, starting with the dramatic advent of Huckleberry Finn, American prose adapted the notion of plain speech into a literary form, culminating in the blunt and powerful prose of Ernest Hemingway. I also want to explore the implications of plain speech as an American form, in terms of its development on the frontier and its fixation on the common.

Im elated to be able to spend a whole summer grounding myself in what I see as the crucial foundation of modern American literature. In my opinion, most Americans, without really realizing it, try to write like Hemingway: The American penchant for conciseness and straightforwardness in writing is the direct influence of Hemingway, but Hemingway cited Twain as his predecessor (as did most American Modernists). I think that it is imperative for us, as American writers, to understand why we write the way we do, and to understand how and why the use of dialect in Adventures of Huckleberry Finn is the antecedent of a book like The Sun Also Rises. 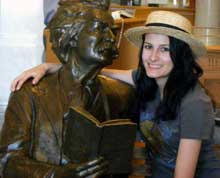 Major: English
Mentor: Mitchell Breitwieser, English
Back to Listings
Back to Donor Reports