Cataracts, which are a clouding of the lens in the eye, affect nearly 22 million Americans age 40 and older, and are the leading cause of blindness worldwide. By the age of 80, more than half of the American population will have had cataracts or cataract surgery. To maintain lens transparency, connexin protein subunits are crucial in forming intercellular gap junction channels for the transportation of metabolites, ions, and secondary messengers. Previous studies have shown that knocking out connexin in the 129SvJae mouse strain results in dense cataracts, while disrupting the same connexin in the C57BL/6J (B6) mouse strain results in very mild cataracts. The Gong Lab has mapped several loci in the B6 background that contain genes suppressing cataract severity, and identified periaxin, a cytoskeletal scaffolding protein, as a genetic modifier for nuclear cataract formation. We have mapped a new gene to mouse chromosome 2 that we hypothesize is related to periaxin, and this summer I plan to test this hypothesis and hopefully identify a second genetic modifier in the formation of nuclear cataracts.

Research has been an integral part of my Cal experience since freshman year, and made me eager to find an opportunity to culminate everything I have learned these past few years into a project of my own. Thus, I am extremely grateful for the SURF Program and Rose Hills Foundation for providing me this opportunity to achieve my goal, and I look forward to strengthening my critical analysis skills and understanding of molecular biology as a researcher. I am especially excited to pursue my passion in a field that can have a personal impact on family members who have cataracts as well as society as a whole, and I want to thank the Gong Lab for welcoming me into their lab and for their continual mentorship and support. 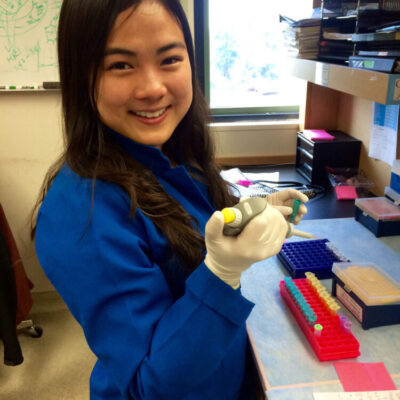