Temporal discrimination of acoustical signals plays a key role in how we perceive sounds. It affects the perception of loudness, timbre and pitch and it determines the rate at which we can parse phonemes in speech. A robust way to assess temporal integration is to determine the flicker-fusion rate: the rate at which a train of clicks is heard as a continuous sound with a low pitch instead of as a series of short sound elements. This rate is approximately 40Hz in humans corresponding to our lower bound of pitch discrimination and an upper bound for parsing phonemes.
Songbirds have been used extensively in neurophysiological and behavioral research designed to understand the perception and production of learned communication calls because they are one of the few animals, other than humans, that are capable of vocal learning. Although it is known that songbirds have frequency resolution similar to humans, it is not known if they have a different auditory integration time than humans. The goal of my research is to determine this key parameter in songbird auditory perception by designing a behavioral experiment to measure the flicker-fusion rate. With that result in hand, laboratories studying auditory perception in songbirds will be able to more directly relate their neurophysiological data to perception by analyzing neural responses with the correct time window. Moreover, it will also allow researchers to design better stimuli in future experiments.

I am grateful for the generous support of the Pergo Foundation for granting me this great opportunity to focus this summer on my research as a SURF fellow. I look forward to planning, executing, and presenting my first independent research project. Conducting this project will enrich my studies at Berkeley, and will give me skills crucial for my future in academic research. 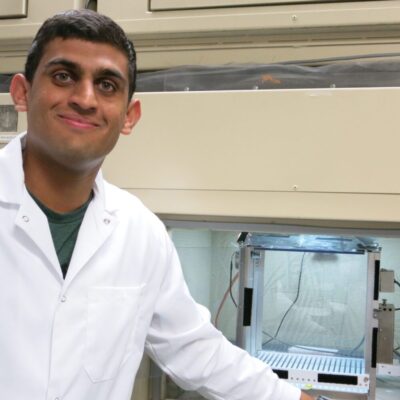