Awakening From The Western Imaginary: The Resurgence of a Unified Rapa Nui Identity Against Psychopolitical Domination

Bloodbaths by Western explorers, followed by various other forms of abuse, resulted in the reduction of the Rapa Nui of Easter Island to 115 people. Being the most isolated inhabited place on Earth, Easter Island has become a major tourist destination today, by means of the renowned landmarks left by the ancient population. Many of the five or so thousand Rapa Nui, all descendants of the surviving 115, believe, on the basis of oral history, in guardian spirits. I am currently living with one of the leaders of an organized occupation of a private hotel built on ancestral land, with spiritual value to the Rapa Nui. Via participant observation and in-depth interviews, I plan to study how the Rapa Nui work to preserve their culture, in the context of an industry based on the commodification of pre-modern values, which brings about the modernization of the people who host those values.

Given its extreme insular condition, the disruption that indigenous cultures undergo in modernity takes a unique, gradual form in the case of the Rapa Nui. I am extremely thankful to SURF for giving me the opportunity to come study this process in action, which I deem crucial to understand the manner in which global interconnectedness and cultural diversity may come to terms. I plan to write my senior thesis in Anthropology based on this experience. This experience is also a milestone in a life-long personal goal of mine: to see the world from as many worldviews as possible. 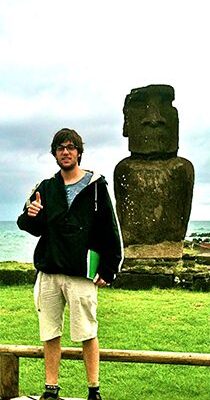