The Nitrogen-Vacancy (NV) Color Center in Diamond is an optically active defect that has been demonstrated to be an effective nanoscale sensor of external electric and magnetic fields. Crucially, unlike other such sensors (such as SQUIDs or Mossbauer spectrometers), the NV center is capable of in situ, or local, imaging of these external fields. Moreover, for NVs in a diamond anvil cell (DAC) setup, one can perform in situ measurements of electric and magnetic fields in materials at very high pressures. This opens up the possibility of using the NV center to study the behavior of electric fields associated with the transition between a paraelectric and a ferroelectric.

In my project, I plan to theoretically investigate the feasibility of studying the ferroelectric transition via the NV center. This will be done by theoretically computing dipole correlations in paradigmatic models of the ferroelectric transition and then characterizing the NVs response to such correlations analytically and numerically. Broadly, the project may open up a new avenue for experimentally investigating and characterizing quantum phase transitions.

I would like to thank the donors for the opportunity to carry out this research project. Programs like this bolster research, as well as allow students to gain valuable skills necessary to become independent researchers. I am certain that the lessons that I will learn this summer will help me throughout the rest of my career. 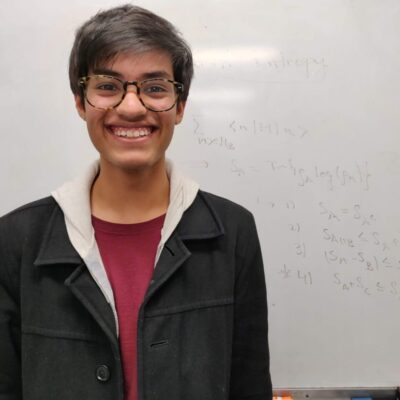