A More Natural Approach that Tests Electrical Stimulation on Perception

Neural Prosthetics is a newly emerging field with many potential applications for patients who have lost one of their five senses. At the core of this technology, electrical microstimulation of neurons is used to artificially generate and restore lost senses. For my project, I will be targeting the visual cortex, and developing a rodent visual model for microstimulation in order to explore stimulation patterns that mimic natural neural activity. The goal of this project is to develop a more safe and effective way to elicit visual response and perception in the animal. Through the course of this project, I will be considering effects from the surgical procedure and animal behavior to properties of electrical circuits and its effect on individual neurons.

This project gives me the chance to research in greater depth than I could imagine possible during the school year. It is a rare treat to be able to work on an individual research project, especially with support from my fellow lab members and SURF committee. I am excited to investigate to the best of my ability in the hopes of contributing to the scientific community while working towards a senior thesis for this coming year. Being a student bound for medical school, I also feel that this may be my last chance to delve into academic research, an opportunity that will train me for my future, wherever it may take me. 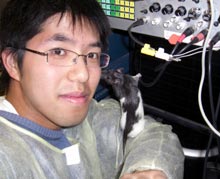