Biofuels have received much attention lately as the need for a renewable and carbon-neutral source of energy becomes increasingly important. We have assembled a biosynthetic pathway in Escherichia coli that produces butanol, a second generation biofuel, in six overall steps. However, there is a significant bottleneck at crotonyl-CoA reductase (Ccr) in the pathway that limits butanol production, which may be attributed to the observation that Ccr suffers from low solubility. The overall goal of my project is to carry out directed evolution of Ccr and generate a library of mutants that can be screened for increased solubility and assayed for improved activity. In the future, the mutants generated in this work will help us to understand fundamental issues related to pathway flux as well as increase production of butanol in engineered E. coli.

In my molecular biology and chemistry classes at Berkeley, I have always found it fascinating when there is a discussion of the scientists and the experiments they conducted that have led to our current understanding of particular phenomena. My undergraduate research experience in synthetic biology has been an outstanding complement to this coursework. It has allowed me to gain hands-on experience by learning the techniques commonly used in the field. I am very thankful to the sponsors and coordinators of SURF for organizing a great forum for undergraduate research. I am looking forward to conducting full-time research over the summer and presenting my findings alongside my fellow SURF participants. 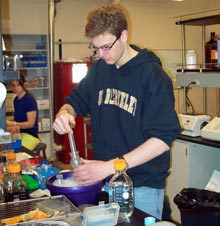 Major: Molecular and Cell Biology
Mentor: Michelle Chang, Chemistry
Back to Listings
Back to Donor Reports