Currently, it is difficult for robots to manipulate deformable objects. This is because deformable object’s plethora of states make it is difficult for the robot to figure out what next action will get it closer to its goal. One solution to this problem is to use human demonstrations. The robot can currently tie knots when given a demonstration of a knot tying sequence. This is done by finding a transformation from the rope state at test time to the rope state at the beginning of a demonstration. This transformation is then applied to the motion of the robot’s grippers recorded during the demonstration to create a motion of the arms that will work for the new rope state. This summer, I hope to extend upon this capability by allowing the robot to choose the best out of many demonstrations, and teaching the robot how to fold towels and garments.

This opportunity means that I will be able to research this summer. If the project succeeds, the robot may be able to perform tasks that could not be done before. I hope this work eventually helps lead to robots capable of improving the world. I will be able to focus on a single problem and will get a taste of research that may create a craving that shapes my plans for the future. Thank you. 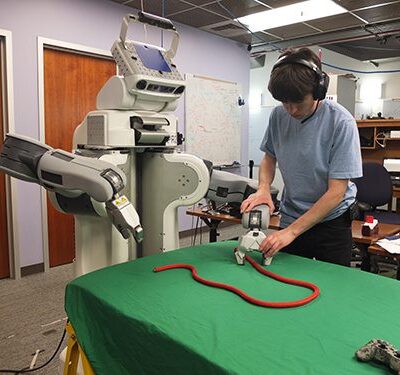