The Resilience of Filipino Activists: A Study of Human Security

Since 2002 the Philippine government has labeled numerous leftist Filipino parties as terrorists, using the Global War on Terror (GWOT) as a political tool to delegitimize opposing parties. Despite imprisonment, torture and killings, Filipino activists continue their struggle for national democracy. This project, contributing to a Peace & Conflict honors thesis, examines their resiliency: how do Filipino activists strategize despite state intimidation? Using the framework of political legitimacy, I will compare the National Democratic Front of thePhilippines (NDFP) and BAYAN, two leftist organizations. The former operates through political exiles in the Netherlands and is deemed illegal due to its promotion of armed resistance. In contrast, BAYAN operates domestically, nonviolently and legitimately; nevertheless, its members remain targets of the state for their anti-neoliberal agenda2. I will analyze the two, through qualitative and ethnographic methods, to explore how Filipinos strategize effectively despite geopolitical limitations and a biased legal discourse.

The SURF fellowship has given me the opportunity not only to pursue my own personal interest in Philippine research, but has also provided me the resources and guidance to develop as a scholar. By funding travel to my research locations, this research grant gives me the financial ability and freedom to fully engage with data gathering directly from primary sources. Moreover, I greatly appreciate the opportunities granted by this fellowship in honing my skills as part of the research community, such as the workshops in ethnographic methods and the research conference at the end of the summer. 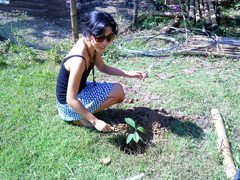