The Progression, prevalence, and transmission of Batrachochytrium dendrobatidis infection in Batrachoseps attenuatus salamanders

Chytridiomycosis has been implicated in the decline of many amphibian species. Most recent studies in this area have focused on the effects of the causative agent, Batrachochytrium dendrobatidis, on anurans. I have found evidence of this amphibian disease in a local salamander species, Batrachoseps attenuatus. This summer I intend to document the progression of this infection in a species that was previously assumed to be unaffected. This summers work is in preparation for subsequent research exploring the means of transmission of B. dendrobatidis, a fungus with an aquatic infectious stage, within terrestrial salamander populations.

To me, receiving a SURF grant for my own research project feels like my first step towards being a real scientist. The excitement of my musings and preliminary fiddlings suddenly becoming an actual research project is mixed with the pressure of now having a real research project. I look forward to my field work and salamander adventures but worry over an ever lengthening list of what ifs; what if I cant find my salamanders, what if my preliminary findings were just lab error and I really have no project, what if this just doesnt work? I guess I will just keep my fingers crossed that my worries will not come to fruition. 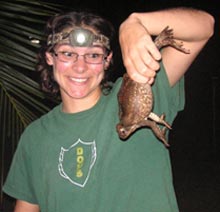