The Habitus of the Protestant Work Ethic: How Social Distance Is Mediated via Social Class versus Economic Status

Habitus is the acquired expression of personal taste in art, dialect, comportment, zip code, literature, entertainment, etc. established by the wealthy (unconsciously) as a means to set themselves apart from the working class. Yet mere expression of habitus by the lower economic strata changes their social class (Bourdieu, 1976). The Protestant Work Ethic (PWE) is best captured by the colloquialism pull yourself up by your bootstraps and is the belief that anyone can achieve wealth and success if s/he is willing to do the hard work. Notwithstanding, the social cues indicating economic status are incongruent with those revealing social position. My research examines the correlation between habitus, PWE, and sensitivity to rejection among members of the same racial/ethnic group.

I have always wondered why I am uncomfortable around African American females despite the fact that I am an African American female. Because of the Summer Undergraduate Research Fellowship, I have been able to conduct uninterrupted research on the topic of intra-group racism. This is a tremendous opportunity because this summer I will interview African American females from diverse socio-economic strata and geographical locations (Atlanta, Oakland, Washington, D.C.). Each participant will be given psychometric inventories (surveys that measure beliefs and attitudes) and a one-time twenty-dollar compensation. Although I am frightened because of the sensitive subject matter, I am excited because this research has implications for all ethnicities, genders, and sexual orientations. 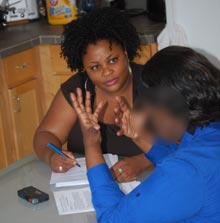 Major: Psychology
Mentor: Rodolfo Mendoza-Denton, Psychology
Back to Listings
Back to Donor Reports