Effects of habitat fragmentation on the population genetic structure of the white-ruffed manakin, Corapipo altera, in southwestern Costa Rica

My research project revolves around the population genetic structure of the white-ruffed manakin, Corapipo altera, a species of passerine bird native to Costa Rica that has been previously studied to determine the effects of deforestation and habitat fragmentation on the genetic diversity of bird populations. By sequencing 15 microsatellite DNA loci from blood samples of individuals of different subpopulations, we hope to detect some genetic structuring indicating an absence of gene flow as expected by theoretical population genetics models. This result, if actually observed, would contradict previous research in this area and provide useful insight into the dynamics of habitat fragmentation and its consequences on the viability of wild avian populations. After the preliminary planning is complete, the necessary fieldwork will be carried out in Costa Rica between August 25th and October 7th.

This research opportunity is for me a unique chance to get to see and study Nature in its grandest forms in the regions of the Tropics, where the fundamental processes of evolution can be readily observed and scientifically tested and measured using the modern tools of population genetics. By being personally responsible for all of the steps of this project Im also gaining useful research skills that will help me in my graduate studies, and Im making important contacts that will help set me on the right path to a career in biological research. The SURF grant made it possible for me to focus full-time on the planning of the project, which is in and of itself an absorbing undertaking that requires all of ones attention and dedication. 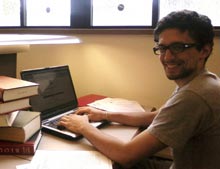