Message in a Bottle: An Advertising Campaign's Appropriation of Inclusive Political Rhetoric, and What This Reveals about National and Global Identity

My research examines a current, multinational advertising campaign, analyzing in detail the campaigns appropriation of inclusive political rhetoric used by president Barack Obama, and what this reveals about American nationalism and global identity. Using multimodal discourse analysis and other more specific visual semiotic frameworks for decoding print and billboard advertisements, I will be analyzing advertisements marketed in the United States and Europe as part of this campaign. Since this advertising campaign relies heavily on the rhetoric of unity, and is multinational in its scope, what can this tell us about the debate over an emerging global nationalism, as opposed to an Americanization of culture across the world?

SURF has given me the opportunity to conduct in-depth research on a topic that I am truly fascinated by. I am very excited to expand on and apply what I have learned in my classes so far at Cal, and am thrilled to be conducting independent research. Thanks to SURF, this summer I have the chance not just to look for the answers to someone elses questions, but to ask my own questions and devote myself to pursuing their answers. I feel very lucky to have been given this opportunity. Thank you SURF! 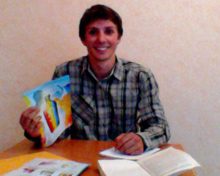