Currently, the lifetime of lithium ion batteries limits utility in applications like electric vehicles. As a battery is cycled, it experiences extreme potentials that decompose the electrolyte to form a layer, the solid electrolyte interphase (SEI), on the two electrodes. The SEI traps lithium ions and generates resistance, both of which degrade the battery over time. Research has shown that the addition of a compound known as a sulfone increases the voltage at which the electrolyte decomposes. This new voltage threshold is higher than the voltages seen in a battery, so SEI growth is reduced. This high threshold is a property of sulfones, even though they do not dominate the composition of the electrolyte solution. Thus, it has been proposed that sulfones preferentially reside on the surface between the lithium cobalt oxide electrode and the electrolyte, and occupy sites where the conventional electrolyte would decompose. This summer I will measure if there actually is a surface enhancement of sulfones using a technique known as phase-sensitive sum frequency generation vibrational spectroscopy (PS SFG-VS), which uses two overlapping, ultrafast lasers to detect molecules specifically at the electrode-electrolyte surface.

The SURF/Rose Hills program has allowed me to pursue my research interests in Berkeley for the first time. In order to save money, I had gone home for the summer in years past. This summer, I have the opportunity to work on an interesting a rewarding project full-time in an amazing research group on campus. Through this research project, I hope to publish my findings for my first original project. This scholarship has already propelled me to learn about alternative energy chemistry, and I hope to study it more thoroughly in graduate school. I am thankful for the SURF/Rose Hills program and the Saykally group for their support. 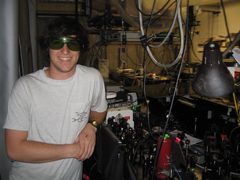