Measurement of Degradation of Historical Sound Records Due to Physical Wear

Even in the face of overwhelming digital documentation, the majority of audio in the historical record is still stored on physical sources. The Project IRENE team is working to save these valuable recordings using non-contact digital imaging and analysis. Wax cylinder recordings, produced between 1888-1902, were the first commercially viable recordings and often used to record inventors, scientists, linguists, and early musical recordings. This process of transcribing audio is exact and delicate, which has made the preservation of these mediums a difficult challenge. Wax cylinders are of particular interest for preservationists because the wax they are formed from suggests a greater susceptibility to wear. If using a stylus to physically playback these recordings could be to the detriment of the cylinder, perhaps alternate methods of sound recovery should be utilized instead. With the help of my mentors, Carl Haber and Earl Cornell at Lawrence Berkeley National Laboratory, I aim to quantify and explore the extent of the damage that is caused when a stylus is used to play a cylinder. Since the grooves where sound is stored are mere submicrons large, the wear sustained would also be just as minuscule. To examine this microscopic, yet potentially catastrophic wear, the project utilizes a three-dimensional scanning system called IRENE, that scans the surface of the cylinder and uses a slew of computer algorithms to translate the physical surface into accurate audio. Hopefully, with a better understanding of how a stylus contributes to wear on the surface of a cylinder, researchers interested in recovering sound from historical recordings can do so in the least intrusive manner, so that these recordings can be preserved for many more generations of listening.

Before I joined URAP, I did not fully understand what my role could be in the scope of research. After participating in the program for two semesters, I have grown to really appreciate tackling challenges in the laboratory setting and working alongside my mentors. I am so grateful to be continuing to research during the summer, and I am excited to contribute to my group. Thank you so much! 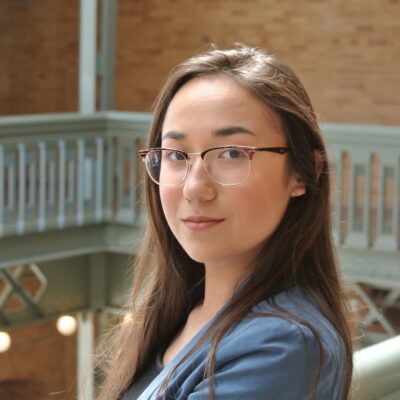